The book "180" by the House Studio just went "The Wrong Way! 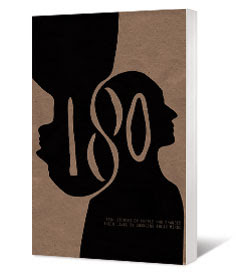 The book “180” by the House Studios (a new publishing arm of the Church of the Nazarene) is a recent publication being promoted to Nazarene pastors.

I read the book as I was asked by a NPH representative to review it, since I objected to how it was being marketed.

The book was more shocking than I expected. After careful review of the book I would say a more accurate title might be, “The cultural effects of 30 years on a : Stories of people who changed their values from conservative to liberal”.

The book is made up of 34 easy to read short testimonies of how men and women of various backgrounds and Christian heritages changed their minds and perspectives and became more tolerant.

The stories seldom quote scripture and none of the stories seemed to reflect Holy Spirit’s conviction of heart, but rather the change of mind from life impacting moments.

The book was something I would never expect to read from a “Christian Holiness Publishing House”. The reader will find testimonies of people changing their own minds on various topics, but nothing reflecting a move of God in the writers’ hearts leading to a life of holiness.

Many write about the bible, doctrine and ethics in a questioning mode verses an affirmative fashion. Just as the serpent in the garden in Genesis 3:1 proposed a Question "Did God really say, 'You must not eat from any tree in the garden'? So in like manner many write questioning their own original fundamental values and convictions and end up with a more tolerant open-minded world view and set of values.

This is the type of book that will create damage among younger growing Christians as it really gives validity to humanistic thinking, heretical understanding of the fundamentals of the faith.

Tolerance, evolution, hell and celibacy are embraced in this book as they would not have been a generation ago. Tolerance is lifted high as a virtue. Evolution is embraced as an acceptable value which one can have and maintain as a Christian. Hell is liberalized and narrowed as to who might actually go there. Celibacy and the Catholic Church are lifted to a place of favor as one writer shares growing up protestant and becoming celibate on the way to the priesthood. The validity of Scripture and moral absolutes are questioned and even denied. Doubt is recognized as a gift and open-mindedness and inclusiveness as a healthy viewpoint to hold.

Not every story is controversial or doctrinally heretical, but the ones that are ruin the book for its full impact. One quote from a writer left my wife and I wondering how this book got published from a was, “why boobs had their magical draw”. Even if this was the language and comment of a life before it was changed, that kind of coarse comment is not necessary and would not be the kind of speech becoming of a person of holiness.

Where are the stories of people who were changed 180degrees from darkness to light? Where are the inspirational stories of lives God touched in a radical way? I believe the should be encouraging readers to pursue holiness of heart rather than confusion of the mind. God is not the author of confusion, but of peace. Most of these stories and opinions are very confused – the inevitable result of denying the authority of Scripture.

This was a most unfruitful book and left me dismayed at the direction of the publishing house that this book was even published.

Posted by Peter Migner at Wednesday, April 07, 2010 2 comments: Links to this post