I am learning a truth from a recent mission trip I went on with the Jesus Film Harvest Partners to Ghana, West Africa. Have you ever picked a bad apple or orange? I don’t mean from the shelf in the grocery store, but off the actual tree. A few weeks before I left on a mission trip, I was invited over the back yard of a lady’s home in our church to pick fresh grapefruit. The colors and sizes varied as well as the location and means to pick them.
I discovered that when the tree was ripe the majority of the fruit was ready to pick. When the fruit is ripe on one part of the tree it is typically ripe everywhere. But where do people pick first? The lower branches are close, easy to grab and so we just grab it. However, a good percentage of the fruit seems to be clustered high in the tree and all ready.
This past January I had the opportunity to go to West Africa to present the Jesus Film to remote villages in Northern Ghana some 18 hours away by car or bus from the coastal city of Accra. We landed in a city of millions to travel to the least populated part of the country. I mean we passed literally millions of souls to get into the regions of the few. 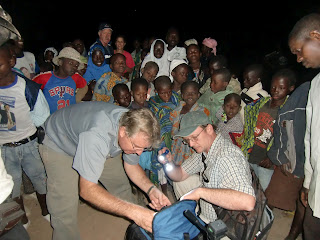 I will never forget the first night we headed out by motorcycles to a small village that we were told was only a 45 minute ride away. After the first hour someone asked how much longer before we get there and Pastor Mathias said, "about 45 minutes". We later discovered that in Ghana (or perhaps even in all of Africa) people measure distance with time and even that is very subjective based on past experience only.

After multiple breakdowns on the road with several motorcycles we finally arrived in this off- the -electric- grid village. It was approximately 9 p.m. and we had at least 30 minutes of set up time before showing the 2 hour Jesus Film. From what I observed, time was not really a factor for anyone in the Garu area. As I pulled up, my gear shift broke off in first gear. I really did not want to say anything, but I was already thinking that one bike would never make it back and now my bike is stuck in first gear.  Anyway, we got busy setting up equipment as little kids and adults surrounded us. It was like Hollywood had arrived at Green Acres before they had electricity. I thought again, “we got here so late and won’t these kids need to go to bed soon?”. As the film started, about 200 gathered around. People pulled up chairs and other things to sit on and lean on. As the film progressed our entire team was a bit weary. We had already traveled some 26 hours over the past 32 hours with random naps between buses and vans to get to this small village with no power, no cars or mechanic shop. Now it was timeto show the Jesus Film to this anxious late night crowd. As many of us leaned against trees and walls to rest and pray while the film played I wondered about a lot of things that night. I wondered how we would get back, how long it would take, how cool it would be and many other questions. I also prayed that God would use the film to touch hearts and lives, but I didn't really know what to expect since this was the first time I had taken part in a Jesus film showing in another country and culture. 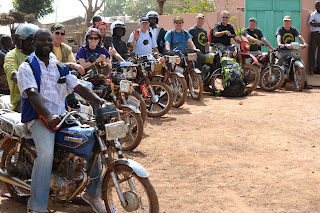 Off to the side of the crowd I noticed a couple guys stirring around a motorcycle. I eventually got up and walked over to check it out. There was Keith Spicer and Tim Eby tinkering with a dead motorcycle. The bike was not even our own, but was actually some random Local from miles and miles away that felt bad for us when the other bike broke down. This guy had just drove up and gave it to the team to get where we were going while he held the broken down one until…. ( I never did figure out how they found him to swap back) 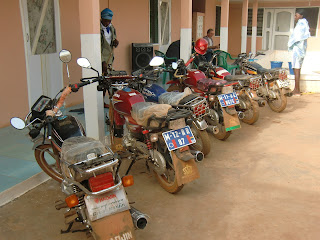 As we examined the bike it was discovered that there was no battery in the bike and a few other interesting missing parts. I cannot remember all the details, but we sure did laugh as we could not get it started. I cannot remember who asked the question or exactly what Tim Eby said word for word, but I do recall a question surfacing that was something like this, “Why did we keep coming out here when we got this piece of junk started the last time? We had the chance to get back before it died again – now we are even further away from where we are staying!"

I recall Tim answering that question and how floored I was with a reality that is foreign to most believers in America including me. “Our objective was not getting home, but getting this film of Jesus out here before these lost people. Now that we are here we will trust God to get us back”.  Soon after, the bike started!  I sensed we had hope to get home, but the reality was that we got home after many more breakdowns, prayers and texts and a miracle of motorcycle provisioning by the hand of God Himself. We found our lodging finally at 2:30 a.m.,but it sure was fun. 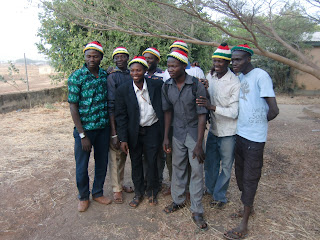 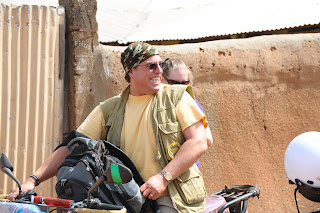 When the film stopped while Jesus was on the cross I began to pray out of concern of the equipment failing, but later discovered it was an intentional pause so that the Ghana pastors could give an invitation to know Jesus. Soon over 30 men stood out and at least 50 altogether were ready to pray to accept Jesus as their Savior who died for them. I was taken aback when they called me out to lead these folks in prayer. I found it a complete joy and our team was elated to see so many make this decision. Through the remainder of the mission trip many more came to Christ. I kept track as best as I could and counted 263 coming to Christ in 4 days. WOW! It was beyond words to see that many people trust Jesus and to pray for salvation. There may have been more, but the harvest is so full that the folks over there really don’t seem to be concerned with how many because there are so many. I found out later that they usually do not even count the children, but just those who are teens or adults. It is not that kids don’t matter, but that they can’t often see them in the crowds because they are so short and get jumbled into the crowd on those dark African nights. Basically it’s not a numbers thing, but a harvest thing.

Now that I am back and as I reflect about that grapefruit tree I realize I did not once think about counting how much ripe grapefruit I was picking, but just that I was picking a lot of ripe fruit. I mean honestly, a ripe harvest means plenty and not few. When Jesus multiplied the fish and loaves the best they could do to describe what happened was to count the men in the crowd as best they could and how many baskets of left overs there were. In Acts, the scriptures tell us that the Lord added daily those who were being saved to His church. Jesus said he wanted each disciples to bear much fruit.
I arrived back home on the 19th and it is the 3rd of February. In that time span I have shared Christ several times and witnessed 6 men coming to Christ. I’ve shared this with several because I am so excited to see God move like this. Six men praying within 9 days to receive Christ is unusual for me, our church and many Christians in the west. Jesus said the Harvest is ripe, but the workers are few. Do we really have a harvest problem in the west or do we have other problems? I am beginning to see the harvest as Jesus said it was-RIPE! So if it’s ripe and we are counting because it’s so few, then we need to discover the missing parts so we can fulfill his great commission and make disciples of the nations both in Africa and in America.

He told them, "The harvest is plentiful, but the workers are few.Luke 10:2

Posted by Peter Migner at Tuesday, February 07, 2012 No comments: