A BaaB of a Faith Journey 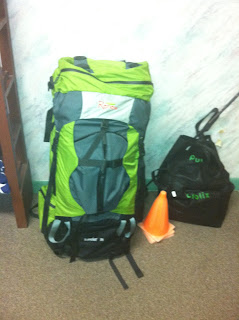 Missions is always about a leap of faith, at least it has been for me. My very first mission trip was in 1989 going to Kenya Africa. Since then and including that first trip I have never had the total resources available to just pay and go. I've always had to step out with desire and faith first and begin to trust, wait and lean on God's timing and provisions.

I've now gone on 6 mission trips since that first one. The most recent one I am in the process of headed toward is by far the most adventuresome and challenging of all. It is also the most exciting one and most expensive in the hardest of economic times. Biker and a Backpack ( BaaB ) grabbed my hearts attention from day one back in February 2011.

Since that date almost every dollar saved seemed to slip from my hands to a more immediate and pressing need in my family and ministry until the first deadline arrived in August. On that day I was able to put down 250.00 toward a roughly  $3,000 West African Ghana trip. I was one of first two people who signed up on time. The trip was delayed for lack of enough people until finally it was approved with 12 days before the deadline for balance due.

It was within a few days of that deadline that God's provisions started to open. An unexpected 500.00 found me and I was shocked. As well, there were the kids In our church doing a “penny drive”. Yes a "penny drive "!  I did not have much hope of pennies providing the final breakthrough, but it was very emotional to think about canceling out on the kids “penny drive fund raiser” because the pastor could not “afford it” or “faith it” all the way through.

I was in a true dilemma and what was I going to do? Then a friend I was going to fly to Africa with backed out for reasons unrelated to my situation. This started making me wonder if my timing was wrong on the trip. I finally emailed a missionary friend about my situation (the lack of funds and my desire).  I ended my email with this exact P.S. sentence (I told the Lord I would be willing to sell my motorcycle to go, but the best price in its condition presently would be about 1500.00 and it breaks my heart to sell my only transportation joy and toy and stress reliever, but if God leads I will do it for souls in Africa without questioning Him.)

The next day a gentleman from my church and I were eating lunch.
During our conversation he asked me how much I would sell my motorcycle for. Needless to say I was stunned at the timing of his question, knowing he did not know what I had just written a missionary a few days before. I wondered if this was God leading the way to provide or was it just God confirming He heard me and revealing he was indeed my provider.

It seemed weird that a pastor who likes to ride motorcycles would sell his bike to go on the first biker Jesus film trip and have to sell his to do it, but God knows what he is doing as I remained excited. After lunch I sent him away for the weekend with the keys to my bike and he was to let me know later. I was feeling pretty good that we both would end up pretty happy on this God ordained deal as odd as it seemed.

That Sunday night he showed up at church with the bike and said , " sorry pastor my bike days are over and I can't do it with your bike or any bike." I said ok and went on my way wondering and still trusting God. I was also beginning to question and doubt a little as well. The next day my friend officially backed out of going on the trip that we had planned for several months to do together.

Monday was a hard day and everywhere I turned it seemed like canceling my trip made the most reasonable decision to make. Perhaps I could go another time to do a Jesus Film BaaB mission trip. When I looked up the prices again on flights to West Africa I was overwhelmed as I could not see a way to raise or get the needed $ 1500.00 for a ticket. On top of this my wife reminded me I needed to buy a ticket for my college daughter soon to get her home and back for Thanksgiving. 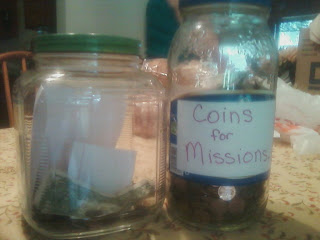 The next day I shared my dilemma with my volunteer church secretary who is also our mission president in our church. Even her comments were inclined that I might wait and maybe it just was not God's perfect timing yet. Then I glanced down and saw the two jars of pennies on the floor of my office that the kids had been saving. Yeah right I thought!

That same day my wife was not feeling well so I took my youngest daughter to the dentist. Along the way I learned that my associate pastor had given his motorcycle away that day, when I knew the night before it was for sale.  He ended up blessing a young man he hardly knew who had a need. That was so amazing to me and revealing the heart of a great man meeting a Spirit led need. I was so excited for both of them as I drove down the road. That alone was another entire story, but it was another story involving a motorcycle and provision happening around me.  Huum! 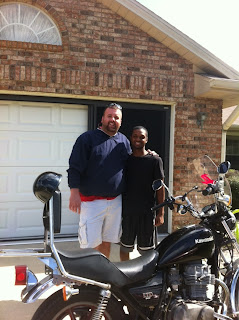 I decided to email the Executive Director of JFHP named Brian Helstrom and ask him to call me about Ghana. Not knowing when he would call me or what I was really going to ask him or even what to expect him to say,  but just wanting to get his opinion about flying alone to Africa and my dilemma.

It was about 1:30 and we were eating at McDonald's after the dental appointment when one of my best friends who is also a pastor called me. We just started talking when I got another call and told him I was expecting a call from
Kansas City and would he mind if I took the call and got back to him.  I took the call from Brian and he nailed me on my issues and boiled it down to, " Peter, either God wants you on this trip or He doesn't and we need people to get this equipment to Ghana or some people will die without a Savior before they see the film".
After that call I prayed and said to myself,” well I'm going to put action to my  willingness in faith and sell bike again”. I sent Brian a text that read [I will sell "my Bike" for "His souls" and put faith to this idea and list the bike on Craigslist when I get home. Thanks Brian]

On the way home I remembered that I needed to call my pastor friend back. We both kept getting our calls dropped and finally he got me back and said, “so who called you from Kansas City anyway?" I proceeded to tell him who I called and about my situation and how I did not know what or how I was going to get the money for a plane ticket to Africa. Had he not asked me about the call I had no plan to discuss it with him.

My friend said, “Peter that's a done deal. We got extra missions money that we can help by purchasing this ticket as this is so missions. Just give us a report after the trip so we know what happened with our investment in missions. Needless to say I was overwhelmed, shocked and extremely blessed.

It was timing of so many interesting factors and calls that only God could have worked out so many details like this. On the way home I texted my NMI president the news and she was excited too. That same evening we had a local Missions council meeting and the last part of the agenda they voted to cover my Visa expenses. It was the icing on the Mission cake for sure.

What started out as an over $3000.00 trip has turned into an amazing story of grace for me, my family and our church. Granted, I have not even gone yet and more adventure is bound to happen, but truly God leads, delays and provides according to His plan. I wonder how many of His children never experience his amazing ways as I have time and time again because so many do not struggle through in faith up to the last hour. It was only when the Israelite priests actually stepped into the flood stage river waters of the Jordon headed to the promise land before the water parted. It was only when Abraham picked up the knife in willingness to slay his only son as a sacrifice, before God provided another means. It was only as those with leprosy went in obedience before they were healed on the way and it was only when Peter got out the boat before he would walk on water.

Like Peter I started to tread water on this trip and when the waves of doubt hit me a few times I started to sink, but praise be to God I looked back up to Jesus and waited as He provided the rest of the means through his people and methods for one amazing journey even before leaving for Africa.

Be encouraged, walk in faith and find His heart and follow Him and see what the Master can do in your journey.