What do you do with 1500 people at your front door?

"As soon as they left the synagogue, they went with James and John to the home of Simon and Andrew. Simon’s mother-in-law was in bed with a fever, and they immediately told Jesus about her. So he went to her, took her hand and helped her up. The fever left her and she began to wait on them. That evening after sunset the people brought to Jesus all the sick and demon-possessed. The whole town gathered at the door, and Jesus healed many who had various diseases. He also drove out many demons, but he would not let the demons speak because they knew who he was". (Mark 1:29-34 NIV)

"The whole town gathered at the door." This sentence might sound like a figure of speech, but it's actually a fact. First we need to think about what happened in town before they got to the house and we need to ask ourselves what was the town like. In 2000 I was in that ancient town of Capernaum and it is right off the shore of the sea and now it's a tourist site of ruins. Back then however,  it was a small fishing village and estimates say it has a population of about 1500 people.

In our county in Florida there is a small town between county lines in the middle of nowhere as some folks say. It's rural, depressed in economy and  It has a store and a gas station and not a whole lot more then that. However it has about 1700 residents that call it home. When something happens in a small town of 1500 -1700 news of it travels fast. So when Mark's gospel says the whole town gathered at the door that must have been some sight to see.

When I was in a small African village this past Feb 2013 in Senegal West Africa I saw a small village show up for an outdoor movie.  What started off as maybe 50 people ended up well over 300 people. In just a few short hours news of something different or unexpected must have traveled fast. We had been digging a well all day and then news traveled that we were going to show a film that night.

There are several things about this historic encounter I enjoy about Jesus and his followers. First is they went to the Synagogue. This implies they had their priorities in line with God's concept of a day of rest and worship. The miracles did not start flowing in this village until the Sabbath day and and that evening after worship. This speaks to my spirit that we need a day of rest with God's people and when we rest and worship and listen to God's Word our faith to receive God's grace is quickened.  It was after the teaching of Jesus with His Authority of Scripture that we see one miracle after another.   The miracles went from Church to home and home to village. I presume the 1500 people were not in the synagogue on the Sabbath evening service. When I was in those ruins I would estimate enough room for maybe 200 maximum.

The fishing village of Capernaum had a kairos Day. The kingdom of God was at hand in the worship service, then the anointing of the moment flowed to the home of Simon and Andrew and by the time the rest of the town of 1500 heard about what happened at church they found our Savior and his disciples at home probably trying to have a nice relaxing meal.

In this story I see how Jesus did not tell them to go away because he didn't eat dinner yet, but rather he began to minister grace, hope and mercy from the Father into as many lives as he could possible touch. And this 1500 at the door happened after sunset in the dark with maybe some good moonlight.   In this encounter I don't see the disciples praying and healing people with Jesus, but I envision them watching Jesus , observing and possibly being the crowd control folks as they (like the entire town)  were probably as bewildered with Jesus and the constant flow of miracles as anyone. So if 1500 people showed up with diseases and demons after dark for help I can only imagine it was a long night. The crowd eventually disappeared and Jesus seems to have gotten a little sleep. However, scripture tells us before Sunrise he slipped away alone to pray.

What a day in Capernaum!! It stated in the outflow from the day of rest and worship and attracted the whole town to one door.

After Jesus left that town I wonder how many were in synagogue the next Sabbath seeking God with a renewed appreciation of grace.  The greatest lesson I believe was likely for those disciples who witnessed something they later were to do themselves in years to come.

The lesson for me is to go with the flow when God shows up. In summary I see an evening of worship on the beginning of a Friday night sabbath ( where a few unexpected things happened ) followed by a relaxed dinner in a home before some sleep. However, when arriving at the home for dinner someone is sick and grace flows again. Followed by a nice meal and fellowship before an unexpected knock at the door comes. After ministry at the door starts it just seems it never ended until maybe 4 or 5 hours later when the crowd drifts off to get some rest and Jesus finally crashes for maybe 3 or 4 hours.  Are we willing to let God redirect our plans like God redirected theirs? 1500 at the door is certainly a kairos moment of kingdom encounter that still speaks to hearts today including mine. 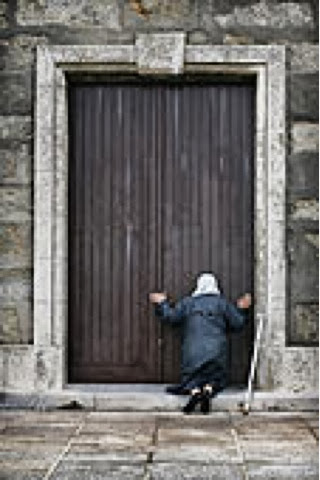 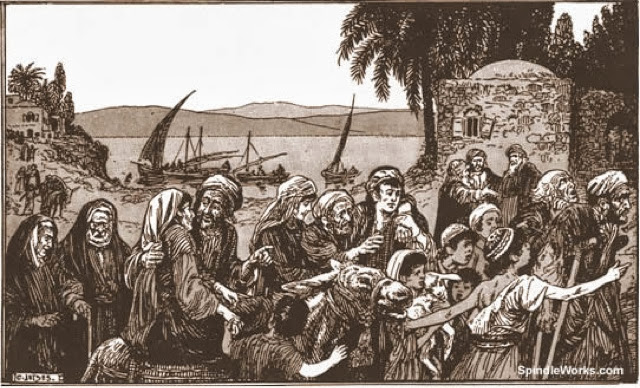 Posted by Peter Migner at Wednesday, October 23, 2013 No comments: Links to this post