Recently I have gotten into a grove of eating right and exercising more. I am committed to walking 5 miles a day and riding my bicycle at least once a week. It's been over a month now that I have done this and I've made some interesting observations of myself and others and I guess the culture as a whole.
Observation #1 Do I really need to take my cellphone with me everywhere I go? I tend to take it everywhere just in case.  I don't need to talk to others, text them or even use a fancy gps app, but yet my habit is "just in case" someone calls or I need others or they need me I better take it along. I believe I'm addicted! Are you?
Observation #2. Am I that important that I need to be accessed on my smartphone all day long?  Answer: NO.  The more accessible I am to others and they are to me the less I seem to get done anyway and the more distracted I can get from life in front of me.
Observation #3 People use their smartphones everywhere like in Grocery stores, in restaurants, at airports and unfortunately while driving in their cars. Do you?  For those who say no, then good for you, but for the majority of Americans that is not the case.
Other Examples:  A week ago I was in a high school speaking to the principal when I observed an interesting encounter. An 18 yr old girl who had her cellphone taken away during class ( because using it is forbidden )  choose to have her cellphone back and drop out of school verses having her relative pick up her smartphone after school or the next day.  I guess in her world everything precious revolved around that phone. She weighed out the value between immediate cellphone returned or finishing high school.  The cellphone won her heart over finishing her senior year and graduating. Which was smarter, the phone or the girl?
A week earlier when I was landing on the runway in Boston I observed an entire plane of people getting out there phones to make calls. It was as if all the addicts at once were pulling out their phones and taking a hit or shot to get their fix. I know I'm not the only one who has a smartphone issue, but I am glad I am starting to see more then ever all it's negative impact on the culture and my own life.
I read this article in the Wall Street journal the other day and here is one quote. " More than 80 percent of Americans use smart phones, but apparently they compromise our sleep, reduce our social awareness, and make us stupid."  I must admit I agree with that quote. I remember when I use to memorize more numbers and things, but with a Smartphone it can remember it for me which in turn causes me to have to do less with my own smart brain.
For years I have tried to get my wife to have a cellphone. She has used them on occasion, but she has not had one and is rarely accessible by one. I do believe she is smarter for it in more ways then I ever realized.  She reads more, she is more focused, she is less distracted and she is accessible by our home phone or through other people in our family.  She's a Smartwife while I the husband posses the smartphone.
Drive thru's now have posted signs that read like this "do not use cellphones while in the drive thru". As well as bank lobby's also have the same signs among other places. Using your cellphone in public places slows the lines down and people talk on them instead of being focused on ordering food, banking, etc. If you really think about it, using a cellphone is usually rude in public places and it's the result of trying to do multiple things at the same time.
About 9 years ago before the smartphone revolution stormed our culture I was at a luncheon with some businessmen. One of them mentioned that when 12 year olds had cellphone he realized it was time to dump his. I did not get it then, but I get it now. Businessmen get more done with less distractions and with more focus. So when more people have access to calling more people then a business persons phone was typically gonna ring more. Several smart friends I've known over the years have disciplined themselves to realize they could do more if they could be accessed less. Some changed their habits and others dumped the phones to a emergency phone only for the glove box.
Our culture and the American people have come to expect immediate results in everything and that also includes access to each other's lives.  But there was a day when we would leave a message and maybe wait a day or two or longer to get a return call.
Just because one device can do it all from knowing the weather to a instant flashlight does not mean everyone needs one. Maybe if we dumped the smartphones we would all spend more time with the people around us, get more done and be more focused and be smarter for it.
Does the average smartphone user put limits on themselves and their phones? Probably not!  People now think less and focus less. While our phones are getting smarter,  the people are being dummied down. Have you ever walked into a business to buy something or to get served only to discover the employee was on their personal cellphone texting or starring at there smartphone with a lost in space glare?
I still have my smartphone, but I am coming to realize its time for me to be smarter about how and when I use it. I certainly do not want to be out witted by a stupid mindless device. Do You? 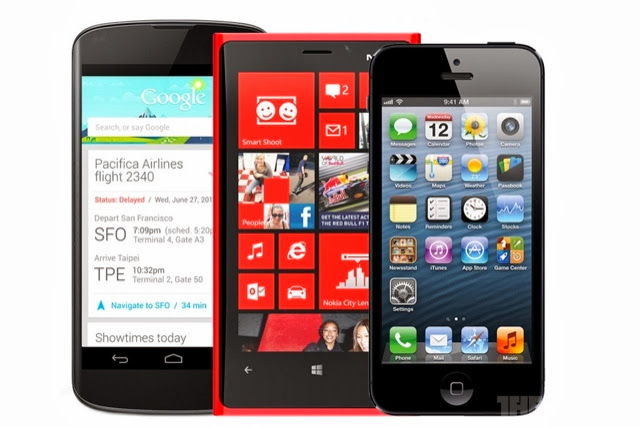 Posted by Peter Migner at Wednesday, October 30, 2013 No comments: Links to this post