Are you Sober Minded? 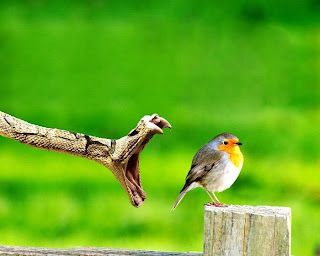 In the last few weeks a lot of attention was drawn to the new book "Love Wins " by Rob Bell. A friend of mine read the book and said his conclusion was that Rob Bell did not have anything biblically solid to say, but rather his book was basically a giant question on Hell with a question much like Eve was given in the garden by the serpent who said " Did God really say you will die? ".


Many people love Rob Bell and his style because they say he makes people think and causes people to doubt things and wonder. Adam and Eve were provoked to question what God first said and looked what happened to them and in turn us. And after they were posed with a question about what God originally said they changed their minds and made a bad decision and we are all still dealing with sin because of it. Adam & Eve intoxicated their minds with another influence beyond God’s.

The bible is very clear from Old and New Testaments that God will hold each soul accountable in the end. God also makes it clear in the Bible that the way to destruction is wide and the way to life is narrow and very few find it. Jesus did not say that everyone will find peace and the narrow path, but few would be on it. Enter through the narrow gate. For wide is the gate and broad is the road that leads to destruction, and many enter through it. Matthew 7:13

It is true that God loves everyone and that Jesus paid a price for everyone's sins so that whosoever wanted Him, the narrow path, forgiveness ,release and eternal life would not be denied.

1 Peter 5:8 says to the followers of Jesus , " be of sober spirit, be on the alert. Your adversary, the devil, prowls around like a roaring lion, seeking someone to devour."

Let me pose a Rob Bell style question to you in reverse? Does God's Word really say you have to be sober minded and alert about an enemy? Certainly God will not let anything happen to those he loves. I could write a long article or even a book trying to convince believers that God's power, grace and strength will never allow anything  bad to happen to His children, but that would not be true to life or the scriptures. Just ask the marytrs someday.

I won't write anything like that because I know that the full council of the Word of God teaches a balance between divine protection and personal responsibility.

What does it mean to be Sober minded and Alert? In today's world the roaring lion is still out seeking whom he may destroy.

In the Gospel of John 3:18 it says," whoever does not believe stands condemned already because they have not believed in the name of God’s one and only Son." The only solution to our present state of damnation is to turn to Jesus Christ and trust Him and receive His offer of escape. If we accept Him and follow and stay sober minded we have great hope and so much more. If we reject, get sloppy and careless and get intoxicated in our minds with the philosophies of this world then we are warned we will be devoured by an enemy. Let us have a sober mind & heart that feeds upon the Word of God, meditating on it day and night. Psalm 1:2 But his delight is in the law of the LORD, and on his law he meditates day and night.

Are you sober minded?
Posted by Peter Migner at Wednesday, April 27, 2011 No comments: Links to this post

Today has been a great day in our church, community and our family. Why?. Because we celebrated the physical resurrection that happened 1,981 years ago today. “Why do you search among the dead for the living, He is Risen”. The recorded historical facts of the death, burial and resurrection of Jesus Christ are a truly supernatural encounter that forever changed and continues to change the world. But just like those who denied it then many still ignore Him today.

Christians meet weekly to celebrate the resurrection with worship, fellowship and prayer. However, once a year we put a special emphasis on the actual Sunday when it occurred. In our local community many come out on Saturday night before Easter to decorate rough wooden crosses with flowers. This past year over 50 crosses placed in front of local businesses on the main drag were set up on Friday as blank wooden crosses and by Saturday late night they were displaying flowers all over them for view on the dawn of the forthcoming dawn.

My older daughter is still in Brazil studying abroad through her college. Last week she told us that in that country everything shuts down on Thursday until Monday morning. They truly acknowledge the Passion Week when Jesus was crucified and resurrected from schools, businesses and government agencies.

This past Saturday I went to a local hardware store and noticed the sign ‘closed on Easter’. After discussing it with the clerk I was told It was likely the last year because the new owners wanted to be open seven days a week.

After our worship services and the powerful presence of Jesus our family had a special treat and went out for lunch in a local closed Mall. As we drove we noticed many stores closed down including Target and many major retailers. It was refreshing to see the mail parking lot almost completely empty. As we got into the restaurant my wife told me a comment she overhead between a couple people trying to shop when given an answer by the security guard. The conversation went like this: Shopper 1 ‘Why is the mall closed?’ Guard: Because it is Easter. Shopper 2 to shopper 1: Why is the mall closed? Shopper 1: Because some man named Jesus died along time ago’.

It is wonderful that the cross and the resurrection still have the power to shut down stores. Those stores and business may become fewer and fewer, but it is still wonderful that many of the holidays that commemorate different aspects of the life of the Savior almost 2000 years ago still have the power over hearts, minds and lives in many ways we often don’t realize.

My comment to shopper 1 If I could have heard him would have been. “He did die, but I want you to know he died for you and he is not dead. For He is risen! Thank God for the global holiday called Easter that commemorates the passion of Christ.
Posted by Peter Migner at Sunday, April 24, 2011 No comments: Links to this post