Jesus Virgins And The Man Who Stunk To High Heaven

The stuff that pastors deal with! The good, the bad and sometimes the mysteriously bizarre.

My last pastorate was on a rural road in a rural town. In the 9 years I served there I dealt with very few strangers and hard pressed situations, at least compared to where I serve now.

In the 28 months of serving in my present ministry very few months have passed without at least a phone call for some need.

There are professional poor thieves out there that know how to play the emotional manipulation game. The best trick in the book is when they show up either before or after a service and track down the minister.

In a little over two years I've received requests by phone or in person and the  needs have varied from electric bills, rent, food, gas, clothes, furniture, temporary lodging, bus tickets  to  “can I work right now for cash”.

At first I use to listen and give my time away or redirect them to some other agency better equipped. Recently I had to smarten up when I realized this is going to happen a lot here being so close to downtown and on the main drag. About a year ago I developed a two page form to weed out the true from the false requested needs.  They have to fill it out before I will even listen to the story. I tell them ahead of time that we do not have a large benevolence fund or food or clothing pantries. Most of the forms since then either get filled out so vague or not readable that I have to ask them all over and they usually walk away empty.
Well this past month I got taken again and as well had skipped the form. I think I need to stick to form and even spend $10 bucks for a back ground check to get the real deal info and story. I wonder if a social security number and $10 too much to ask someone who is looking for help?


I use to leave the door unlocked during the day and then I had to lock it so they would not just walk in on me like they owned the place. One time a man walked into my office with his bible open and told me he was a prophet coming through town. He tried to talk to me without permission or consideration that I might be busy. He never introduced himself other than he was a prophet of Jesus Christ. After about a 3 minute forced bible study in my face, I said “what do you want”? He said the Lord wants you to give me gas money. At that point I was a bit perturbed with this disturbed prophet. Then as nice as I could I asked him to leave my office. When he insisted I stood up and told him that if he was a prophet then he should have known the future enough to know I was not going to give him a dime. I really did not say that, but in hind sight I wished I had. Sometime later I found out he did a lot of damage emotional to a few other churches in our area.

As he headed out the door in front of me I saying “get out” when he proceeded to call down curses on me. That was among the worst. Another interesting story was the man who came on a Sunday morning who had another long story that I had to cut short. He cut to the chase and asked me for a shower and a place to sleep for a night. No money or food, just sleep and shower.

I told him I needed time to process his request and would give him an answer after church. Then he asked if he could join us for worship. Well of course I said yes. But this man truly stunk to high heaven.

The people who came to church that morning were very nice to him and several who sat around him never said anything or treated him different because of his appearance or smell. He was loved and given kind welcomes as anyone else would be. But his odor was truly repulsive. I must admit he was the worst human I ever had to smell before. That particular Sunday my wife was out of town and I had my 4 youngest of 5 kids with me and it was a juggling act. I sensed the Lord wanted me to really bless him. So after church I took him across the street and told him to order whatever he wanted for lunch and told the waitress I would be back soon to pay for him.

I left and went to Goodwill and bought him fresh clothes including under wear to shoes (the works). Then I came back and took him to the best hotel in town. He was one blessed soul. I never heard from him again and our total bill was about 100 bucks on that guy. It was a small price to pay to help restore the dignity of someone.

Several have found my home from time to time and asked for money. The strangest one was a young woman about 22 who looked well dressed with purse and all. She rang the bell at 11:30 pm and wanted to talk to the lady of the house. After a series of my questions and no clear answers I told her request was not going to happen. She walked away down the street. Of the many who ask for gas money I usually meet them at the gas station if it feels right and then half the time when I get there they are nowhere to be found.

One day a tall man in his 60's came by and demanded we give him a refrigerator. That man was not such a happy camper when he left.

I've helped people who have the most bizarre stories. Some have worked off projects for cash or gas, others I've bought meals and given grocery cards too.

Many leaders in certain pastoral assignments can identify with these unexpected interruptions, challenges and blessings. Some are demonic and others are just pitiful. Few hold promise and many are professional abusers. And so many who we minister to each week in our local churches have no idea about the people off the streets we deal with behinds the scenes. 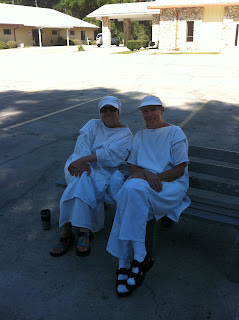 I’ll close with a rather goofy story that happened recently that inspired me to write this entry. I just finished helping a man get money to prevent him from living on the street (who has since has left town after weeks of helping) when I was approached by another couple ladies in the parking lot. They were dressed in white looking like 'disciples'. The picture to the right is actually the ladies themselves. My first thought was cult, then just weird and finally bizarre. They were Joan & Carrie in their 30's and 60's and they traveled the country by faith as they claimed. They did not know where they were going and asked for a place to roll out their bed rolls. After an hour of strange conversation I gave these vegetarian virgins for Jesus two bananas, 20 bucks and permission to sleep in their car in the parking lot. They did indeed refer to themselves as Jesus virgins.

Many in our congregation miss these experiences that find me and many other pastors in our nation. Some of these stories make the pulpit at times, but most never do. Our associate pastor to young families has had his own set of these stories now and we have shared a few of them together as well.


I hope a little glimpse into the mystery of ministry will inspire you to be discerning, open and more understanding of some of the odd things perhaps your pastor does while serving you as pastor in your community.
Posted by Peter Migner at Monday, May 02, 2011