Get Off Your Donkey

Recently I preached a message titled "Get off your Donkey".  Needless to say I got a lot of laughs from the message as I spoke of donkeys in the bible with who rode on them as illustration. Illustrating that ministry  happens when you get off your donkey. The comparison being the donkey to our agenda. More often then not we don't make room to do God's will because we don't leave much margin in our lives to navigate off  "our plans".  Like Peter and John who were going up to pray in acts left room for God to navigate them off course through a beggar. Boy that sure turned all of their days into a different direction.
My final dismissal comment Sunday to the congregation that morning was,  turn to your neighbor and say, " I'm getting off my donkey". Needless to say the congregation busted out in laughs as we headed out the door.  The next day I found myself riding my donkey ( agenda) as we all do. I had my plans, schedule and a preconceived view of how the day was to go as I started to live it out. It was a full day with reports and deadlines to try to meet with people and places to go , etc.  Halfway through my day several people crossed my path I did not have plans to cross paths with. One of those people was Jannie. She needed gas and was looking for help from churches , but not until she found me outside the church building had not even found a pastor on a Monday.  She proceeded to tell me way more information then I needed to know before telling me why she was telling all that info. I've been around the block a few times with people asking for help,  so I asked her what she wanted. So without a dollar figure she said "I need gas to get home".
To God's credit I recalled my own message , so I decided to get off my donkey agenda and be interrupted. So Jannie followed me to the gas station. At the gas station she asked if I could buy her something to eat. I decided to do so, when God said to me, "have lunch with her as well".  So while I was buying us lunch at the gas station she asked if I could get her some oil for her car.  I said lets go eat first back at the church and then check the oil.  So when we got back to our church we sat outside at a picnic table.  As we ate together she really opened up her heart. She told me so many parts of her journey and mostly they were hard pressed situations. She did tell me about her grandkids and some good things to, but mostly about the challenges.
It was during our lunch that I began to ask questions about her spiritual journey and how she viewed God. As  she cracked open the window, but I perceived she used church as a source to get through verses Christ as a personal Savior who could walk with her through daily life challenges . So in our conversation I asked her if she had ever been born again as the scriptures revealed we must be to see and enter His Kingdom. Her confession was honest and interesting. She said she had never been baptized and admitted she'd heard about being born again. When I pressed a little more she admitting to hearing about being born again and then openly admitted she was not saved from her sins.
At this point I was eager to help her enter the Kingdom through repentance. I asked if wanted to be saved and know the Lord. She easily said yes and willingly was ready to pray. Knowing a lot of her life story now, I realized she had changes in store if she was serious about prayer and repentance. So I began to go over the apostles creed with her line by line to affirm that she was really believing rightly about the Savior what she needed to believe. She affirmed she believed, she was a sinner and was willing to change.  She had no local church she belonged to and lives probably to far away from ours to attend. I also thought lots of people have probably planted the seed of faith with her over time as well as watered the seed of faith. However in God's providence I got to reap the rip harvest on this particular day in a context that Jannie would be receptive to.
Jannie and I prayed as the tears trickled from our eyes. After we prayed , I took a picture of us together while checking her oil. It was low and off to the parts store we went on one more errand before she headed home. Years ago I would have felt satisfied that I led someone to Christ as that is easy for me as one called to evangelize. However,  over the years I have learned that discipleship is equally important. I hope and pray that Jannie is the seed that fell on the good soil and not the other 3 types of soil.  We plan to stay in touch and I hope to have the honor to baptize her soon somewhere.
Pray a short prayer for Jannie as you conclude reading this post and consider how you can be ready  with pyour agenda for God's agenda at any given moment. I admit , it's not easy to get off your donkey and head in another direction, but it is completely rewarding when it ends up like the events I had with Jannie the other day. 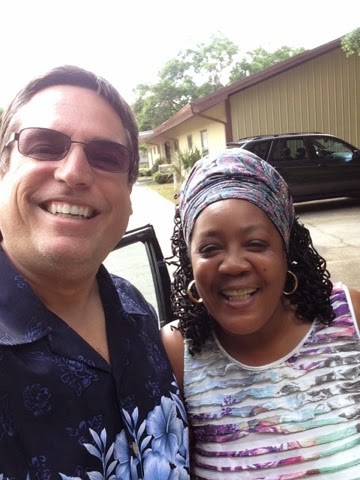 Thank you for sharing your story, Peter! Because you got off your donkey, hell has lost a soul, and Heaven has received as one of its own one who has been saved by the Master's grace.

JESUS, LORD, I pray for Jannie, thanking You first for her salvation, and asking blessings on Peter for his obedience to serve and for getting off his donkey. Prosper Jannie's soul, holy Savior, that she may henceforth honor You with her life, and bear much fruit to glorify You, and in turn enrich the population of Heaven by her own obedience to "GO!" May Your name be forever glorified, sweet Jesus. Amen.